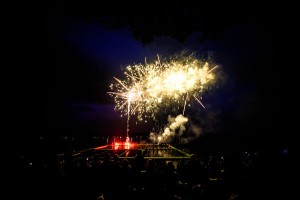 What a fun-filled day we had! It must have been one of the best Independence days we have had yet! The sun kept all of the special events running beautifully.

The morning started with the ceremonial flag raising. The Olympic Generals spoke on freedom and what it means to them. After the flag was raised, everyone made their way to the gravel entry way for the 2013 Great American Egg Toss. Yolks were flying as one by one pairs were eliminated after their egg’s shell became no more.

The afternoon was spent on the waterfront during free swim. Deliciously refreshing snow cones were served beach-side. After dinner, everyone gathered on the Dining Hall steps for Banana Boat Sundaes topped with all the trimmings.

The evening finished with a spectacle of fireworks at the beach. Oohs and Aahs were heard in between the cracks of the pyrotechnics, and what a beautiful sight it was. We hope everyone enjoyed their day and had a moment to reflect on the freedom that we all have.