Music With a Message 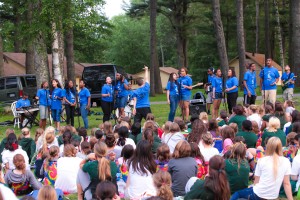 Last night, we were rocking and rolling to a visiting musical group, Music With a Message (MWAM). The concert was held outside on Inter Hill.  All the girls brought their Crazy Creek chairs, but by the second number, everyone was up and dancing.

Created in and by people in South Bronx, this group of young artists perform cover and original songs alike.  Their originals are written to inspire social change.  A fan favorite from the night was titled “Pull Up Your Pants”, and spoke on boys and men “sagging” their pants to seem cool.

Music is a medium for which issues such as these can be conveyed to people of all ages in a light yet heartfelt manner and MWAM did it with such quality.  We are so appreciative that this group chose to spend an evening with us and hopefully look forward to hosting an encore performance next year.  Congratulations for conveying positive messages!