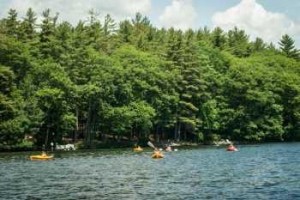 The second full day of activities was simply beautiful and all activities were in full swing.  Today was a special one at Vega, as this afternoon was Olympic breakout! Olympics is Vega’s “color-war” and continues throughout the summer, culminating near the end of camp.   Vega Olympics is a fun and meaningful Vega tradion.  It is an opportunity for everyone to be part of a supportive team working together for a common goal,

This afternoon’s spectacular Olympic break began at the end of lawn lunch.  The music that was playing for the meal suddenly stopped as then Tamary co-generals appeared on 4-wheelers (as passengers of course) and led everyone down to the soccer field, through an arch of green and while balloons.

There, the generals waited behind a huge Olympic sign.  They broke through the sign as the crowd gathered and staff members started launching green and white commemorative Vega Olympic balls into the air.  Each ball was marked with a different camper’s name and the girls found their names on a green or white ball signifying what Olympic team they are on.

The Olympic opening ceremony will be later this week and the first Olympic events take place on Sunday afternoon.  The green and white team leaders are ready to lead their teams with spirit and encouragement. 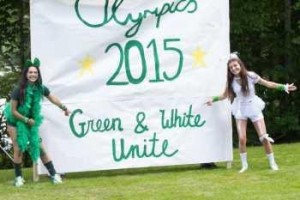 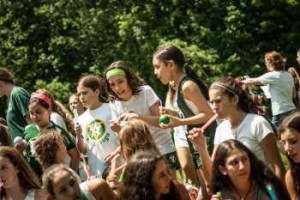