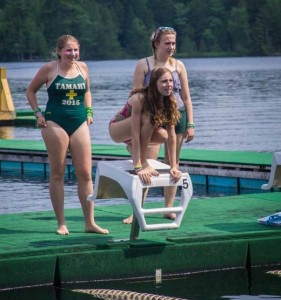 A plethora of activities took place last week, and two of them had summer Olympic implications!  A few nights ago we witnessed Senior Airband, which is a gigantic lip-sync competition.  The music department did a fabulous job getting each performances track set up.  There were some interesting themes to help give the girls some guidance on where to begin with their performances, such as The Voice, Top Chef, Dancing with The Stars and Survivor.  In the end, the Green team placed much higher than White.

On the Olympic afternoon on Sunday the temperature rose quite a bit and we decided to postpone the Junior landsports events and have water games at landsports and a general swim instead.  While the water games were going on, the Seniors on up competed in swim relays.  White fortunately made up some ground down in the swim lanes.  The current Olympic update is: White – 114, Green – 150!  There are still plenty of events left and it is everyone’s Olympics, but White does have some ground to cover.

Two nights ago the younger girls enjoyed “Business Bunks”.  Sub Supers down transformed their cabins into businesses such as carnivals and spas.  Despite the fact that there was no exchange of currency or bartering, the customers and the proprietors all considered the event a success!