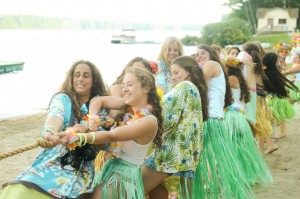 Last night the shores of Echo Lake transformed into the sandy beaches of Hawaii as the Seniors, Super Seniors and Tamary participated in the annual Camp Vega Luau!
While the girls enjoyed dinner, the male staff kicked off the evening with an opening show, and multiple games of tug-of-war soon followed. First up was Tamary vs. Male staff (sorry Tamary, the guys were just a bit stronger), followed by pulls between each group. After tug-of-war were many rounds of limbo and other games. There was no shortage of tiki torches, grass skirts or beachy music, which was the perfect setting for one of camp’s most anticipated traditions.
With camp in full swing, check back for more posts on the exciting events of Camp Vega! We’ll be here everyday bringing you a glimpse into a day in the life of our awesome campers.
The Camp Vega Team 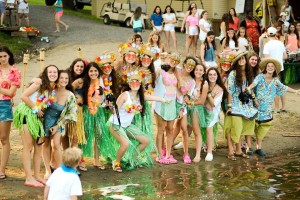 « Let the Games Begin! » Music with a Message