This summer’s Vega Olympics have begun!  Last week during Lawn Lunch the local radio station stopped for an advertisement 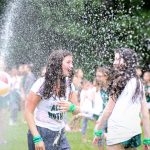 break to wish the Vega campers a fun Olympic season.  The the girls ran to the Landsports fields to partake in a beach party filled with beach balls, sprinklers, and a variety of special frozen treats.  The Tamary generals and co-generals pulled in decked out in their team colors, and Olympics was underway.

Olympic Sunset Circle gave the brass an opportunity to wish their opponents good luck, and speeches reminded everyone of the importance of good sportsmanship.  Every team needs an opponent to compete, and the campers should always practice gratitude, even in the heat of competition!

The first Olympic events on Sunday involved a variety of games, races, and competitions.  Green is off to an early lead.  However, there is plenty to go and all of the campers know…  “It’s Anyone’s Olympics… It’s Everyone’s Olympics!!”