Unplugging for the Summer

Many camps, including Vega, have a screen-free policy which enhances the summer experience program by allowing campers to get the most of their summer mentally, emotionally, and physically. For ten months, our eyes and minds are addicted to screens: Phones, iPads, tablets, video consoles, and the list goes on. We can be constantly connected to our family, friends, businesses, strangers, and an almost infinite amount of information though social media and technology.

The reality of today’s world is that tweens and teens have not experienced a life without technology. Forbes published that teenagers in the United States spend around nine hours each day in front of a screen. As Arianna Huffington states in Burnout: The Disease of Our Civilization, “The connection that often comes from technology is not only an unfulfilling, ersatz version of connection, it’s a siren call (or beep, or blinking light) that begins to crowd out the time we have for real connection. Even worse, it begins to rewire our brains to make us less adept at real connection.”

As you can imagine, this can be detrimental in the fundamental development of the brain. This excessive amount of screen time leads to a lack of restorative sleep, sensory overload, as well as a hyper-aroused nervous system. Dr. Bruce Perry told Early Childhood Today that, “technologies are passive. Because of this, they do not provide children with the quality and quantity of crucial emotional, social, cognitive, or physical experiences they require when they are young.” In addition to these health consequences, technology and social media play a prominent role in the development of self-esteem. 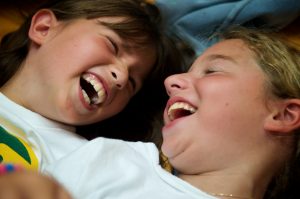 Having the ability to go to camp allows Vega campers to experience a detox from what can be a toxic cyber world. Being untethered to phones and other screens enables campers and staff to create and develop genuine connections and relationships. Throughout every moment of camp, campers devote their full attention and energy into what is going on around them. There is endless conversation during meals and campers are mentally present during activities. Campers utilize their downtime by engaging with those around them, rather than secluding themselves to scroll through Instagram and Snapchat. The absence of technology undoubtedly promotes human connection and strengthens emotional intelligence.

Because the constant inundation of information and often superficial contact is temporarily removed, campers further develop their independence and resilience.  When they run into a challenge during the summer, they turn to counselors, staff, peers and themselves.  In turn, this helps improve problem-solving skills, increases confidence and efficacy, and develops emotional intelligence. Allowing campers to keep phones or other devices would jeopardize their overall experience and ability to grow emotionally and socially.

So, thank goodness for camp and the seven weeks at Vega where we can all unplug and reconnect with one another!

Tons of love,
The Vega Team

Thank you to this blog’s contributor, Vega camper and staff Alumna, Jackie Rothberg.