Linda’s Appreciation for the Wonderful World of Camp Vega

Hi Campers and Staff and Alumni,

I was asked to write a piece for this week’s Vega Blog and decided to write a brief history of my early days at Camp Vega.  I also wrote a broader history of camp for those who would like to read more about Vega’s earliest days.  I hope you find it interesting and enjoyable.  In the meantime, I look forward to Vega 2019!!

“Clang, Clang, Clang!” The sound of Camp Vega’s rising bell could be heard from its new location on the oak tree by the front office.  A few days earlier, Harold the camp’s caretaker tried to place it on it’s old location atop the White House, but in the middle of this task, his leg broke through the shingles.

It was late May 1975 and I vividly remember this since Dick and I were working in the office and heard his shouts for help.  Well, the end of the story was Vega’s ‘White House’, known then as ‘The Administration Building’, had to get a new roof.  Oh, and Harold was okay, other than feeling embarrassed and a little shaken up.

That first summer Dick and I worked with Matt Penn, who at the time was President of the Jewish Communal Services of the United States, as well as the retiring director of Vega.  Matt was eager to share his knowledge of Vega’s daily life at Vega as well as ‘the big picture’ of powerful, teachable moments that enrich a child’s perception of herself and others.  Matt was warm, patient and kind in sharing his wealth of knowledge with us.  His wife, Mary, had passed away seven years earlier and they were the parents of three lovely daughters.

One of the memories he shared was how the girls would arrive to camp.   They would travel by train to the Readfield Depot train station, ten miles from Vega arriving in traveling suits, proper shoes and white gloves, the traditional dress of that era.  At camp, they would store these items until the train ride home after two months in camp uniform. Matt also shared how hard it was for he and Mary to run a camp on both sides of Echo Lake.  After a long day with the juniors, Mary would boat back to the senior side of the lake at night and return the same route in the morning.  I can only imagine how taxing that was on Mary, who I understand was also a talented educator and leader of the Junior Camp.

In April of ’75, Matt Penn showed us to our cabin on the waterfront.  It was an unused senior cabin named, ‘Moosehead’.  We were greeted by cobwebs and and a myriad of smells as we entered for the first time.  Bunk mattresses were suspended on chains from the ceiling. There were wooden cubbies scattered around. I had a feeling of dismay seeing my new living quarters for two and a half months, but I let this feeling pass.  New beginnings come with many sacrifices and this was a minor one that could be fixed with ‘elbow grease’!

Also that year we met Ellen Greaves, Matt’s head counselor and program director.  Ellen was smart and had a great sense of humor.  When Matt left the campus and returned to the Cove, Ellen ran the camp operation.  She soon became my mentor and we worked well together.  Dick was able to focus on the development and projects of the camp, interfacing with contractors, and the caretaker. I could focus on camper profiles, bunk assignments, and staff training.  He also had a great sense of humor giving announcements at every meal and the campers, especially the seniors, would sing songs such as, “Here’s to Dick and the way he does the hula hop” and would continue until he did a little ‘hula’ move…very cute!

That first summer was a whirlwind of activity but my favorite was learning all of the camp songs and traditions that make Vega a unique place, such as our weekly Sunset Circle. To this day, it still remains one of my favorite parts of camp life. I also met Varna the tooth fairy who took me into her confidence telling me that it was she that left a candy bar under a child’s pillow who had lost a tooth.  You can only imagine my surprise in meeting a real, live tooth fairy!  She even allows me to tell stories of her life with Violet, and her husband, Tom.

We did make quite a few program changes and additions, such as two teams of “Green and White” for Olympics, rather than four teams named after countries.  We developed several fine and performing art studios and programs over the past 20 years.  We also changed the Senior Social Lodge, Tamary, (named after Matt and Mary Penn) and remodeled it to be the cabin of choice for our fifteen year olds (Katahdin was always reserved for this age group). 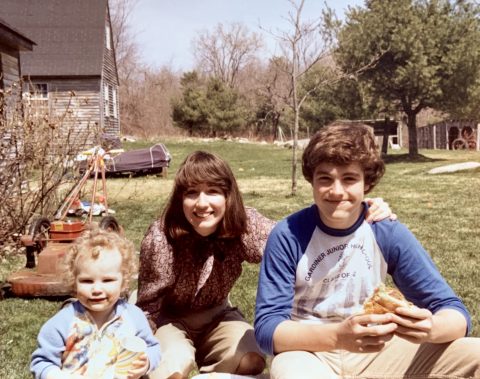 The years have flown by and there were many land development and building projects that consumed us. Our son, Kyle was born and we moved from Gardner, Maine to live closer to our families in Massachusetts.  I was going to list here all of the new structures but realized that most buildings at camp are all new.  A few were renovated such as Katahdin, Sugarloaf and Cadillac, one of our art buildings.  The renovation of the White House was the most ambitious after we decided to leave the original farmhouse that was built in the early part of the 19th century, preserving a rich history of Vega’s past.  During this renovation, when the earth was excavated, a huge boulder was excavated and was moved to the location we see today as it rests on the Vega hill, beside the white birch tree.

Arthur Dean and Tiger Hewett worked on this project.  Arthur worked at Vega for most of his life and we have a special Arthur Dean Award that is presented to an exemplary pre-camp or maintenance staff member who work on grounds and building projects each summer. Tiger Hewett remains our Onsite Manager.  He was hired to do work as a 13 year old, and now has been with us for the past 38 years.  We are grateful for people like Tiger who have given most of their life in aiding in the excellence of camping.  Scott Bilodeau replaced Arthur after his retirement 8 years ago, and continues in the steps of his predecessor sharing our vision of excellence as we forge into the future.

Kyle’s and Steve’s father, Dick, retired in 2004 to enjoy a well-deserved retirement.  Sadly, he passed away shortly thereafter.  I wish Dick were still alive to see the fruits of his labors and know that Kyle and Emily are successful camp directors being vigilant on continuing the excellence of Camp Vega.  Not everyone is cut out for this.  Leaving family and close friends for the summer, and declining invitations to weddings, barbecues and summer outings close and far are part of a camp director’s life.

Personally, I have not regretted one summer or year I have been at Camp Vega.  It has been my privilege to serve the families who entrusted their daughters to us.  I made close friends with many camp families, fellow camp directors, and staff and I have unforgettably joyous memories from the forty four summers of my time at Vega.

I am thankful to have two wonderful sons and daughters-in-laws.  Steve, my oldest son, resides in Irvine, California with his wife, Beth and my two grandchildren, John, ll, and Katherine, 16.  Steve and Beth worked at Camp Vega for four years (full time) before transitioning into the fields of their choice. I am grateful for the fine work they did at Vega and the many lives who they touched during their tenure.

I am also thankful that Kyle and Emily showed a keen interest in the family business. Their talent and passion in running this massive operation ensures the success and legacy of Vega.  They are also wonderful parents to my grandchildren, Cameron, 5 and Paxton, 9.  It’s great to enjoy summers with my grandkids and visit Paxton on Parent Visiting Day at Camp Takajo, just like I did when Kyle was a camper there. 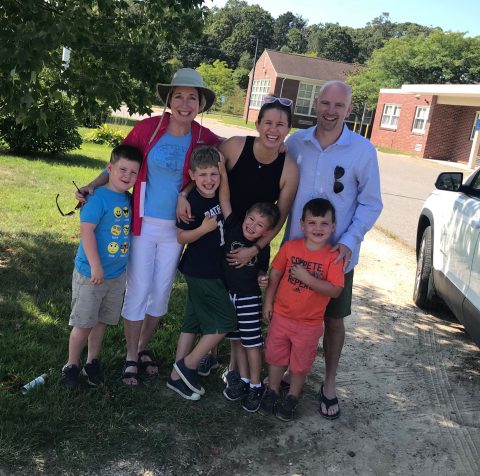 Continuing with my gratitude, I found a life partner who enjoys and loves Vega as much as I do. I met Michael O’Connell in Boston almost five years ago.  We were struck by the similarities in our lives and quickly discovered we share the same interests, hobbies and love of life. Michael’s Sunset Circle guest speaker talk last summer was given a standing ovation.  He is truly part of the camp community now and everyone loves Michael, especially me. Michael makes my heart go “Pittah Pattah”.

« From One Camp Parent to Another » A Vega Values Weekend