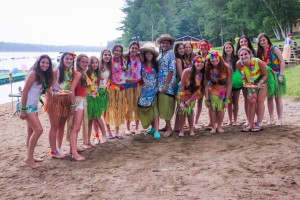 While the prospect of showers loomed around, only slight drizzles appeared and we were able to run all activities as planned today up to and including evening activity! For Seniors, Super Seniors and Tamary, that meant a Luau Party on the Beach.

For dinner the 3 oldest groups dressed in their beach attire and headed to the water. There they were greeted with dishes on delicious glazed chicken, whole grain rice, spring rolls and tables of fresh fruit and perfectly baked macaroons. As the groups made their way through the line, the traditional mock-tribal fight commenced (tribesman played by our male staff). After the big event, age groups competed against each other in tug-o-war and ended the night with limbo.

The event is always a fan favorite and filled with energy by everyone!