Greetings 2018 Vega campers and staff!  With opening of camp nearing the two month mark, preparations to organize another vigorous program of exciting activities continues.  This year, we have decided to introduce the sport of Pickleball, one of the fastest growing sports in the United States.  Perhaps some of you have been introduced to this sport or have played it.

Pickleball is similar to paddle tennis, but is played on a much smaller court and the net is 2’’ shorter than a tennis net.  Players use a paddle, not a racket and its design is similar to a paddle racket.  The scoring is similar to ping pong (table tennis), however Pickelball requires two people on a team, four people on a court.  Scores are called out before each serve.  Points are scored when the serving team scores a point and the opponents cannot return the ball over the net. 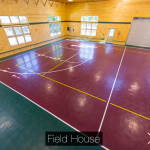 Instruction and games will take place inside the Field House during rest periods and coaches periods throughout the summer. Plans to add Pickleball lines are moving forward.

Camp Vega will supply paddles and balls, however for those of you at home who already play the sport, pack your paddle!

See you in the Field House!

Kyle, Emily, and help from Pickleball enthusiasts, Linda and Michael