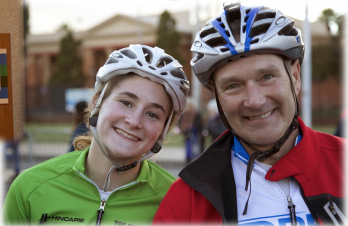 We are always proud to hear about the numerous and meaningful accomplishments of Vega’s campers, alumnae and staff.  We are excited to share with you the most recent accomplishment of Tamary 2013 camper, Ashley Randall, who completed a 62 miles bike ride in Tucson, Arizona for the Juvenile Diabetes Research Foundation (JDRF) on November 23,2013, and was the top fundraiser

From JDRF: “The infamous “Green Jersey or “Top Fundraiser Award” is given out to the Top Fundraiser for each of our 2013 JDRF Ride locations. This award goes to the individual who has raised the most money by Ride Day. We ask the winner to wear it proudly on Ride Day.

This year, Ashley Randall of the JDRF Long Island Chapter received this award at the JDRF Tucson Ride to Cure Diabetes, raising $14,780!

Ashley was diagnosed with T1D in 2007 at the age of 9 ½. She volunteered at her first JDRF Ride in 2010 at the JDRF Tahoe Ride to Cure Diabetes.  The very next year, she rode her very first JDRF Ride in Tucson, in 2011, right after she turned 13.

Ashley has been involved with JDRF in many capacities since her diagnosis and has never has let diabetes stop her from doing anything.

We know that it takes a lot of heart, in addition to a lot of work, to raise the amount of money that Ashley raised, and we could not be more proud!”

Ditto and way to go, Ashley!